Flash PMI data shows the UK economy picking up speed in October. However, the expansion seems increasingly dependent on the service sector, which in turn seems subject to a slowdown amid the recent increase in COVID-19 cases, and has been accompanied by an unprecedented increase business costs, which led to a record increase in selling prices.

The IHS Markit/CIPS flash composite PMI, covering both services and manufacturing, rose from 54.9 in September to 56.8 in October, indicating the economy’s fastest expansion since July .

However, growth appears increasingly unbalanced, with the recovery led by the service sector, and consumer-facing and hospitality businesses in particular, driving expansion for a third consecutive month. By contrast, manufacturing saw output growth all but evaporate, slipping to a near-stagnant pace which – barring the months of lockdown – was the weakest performance since the start of 2020. The resulting gap between the fast-growing services sector and the weakening expansion of the manufacturing economy was the widest since the start of 2009. 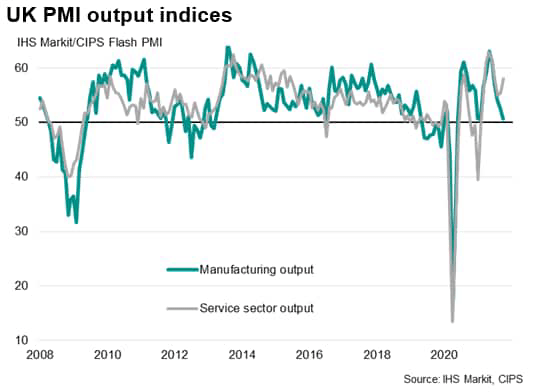 While the services sector continued to benefit from the opening of the economy, as the application of COVID-19 restrictions was largely removed, the growing number of employees returning to city centers and the increase authorized displacements, the factories were besieged by a new aggravation of the situation. supply chain delays and ongoing staffing issues, as well as declining exports and what appears to have been a diversion of spending towards services. 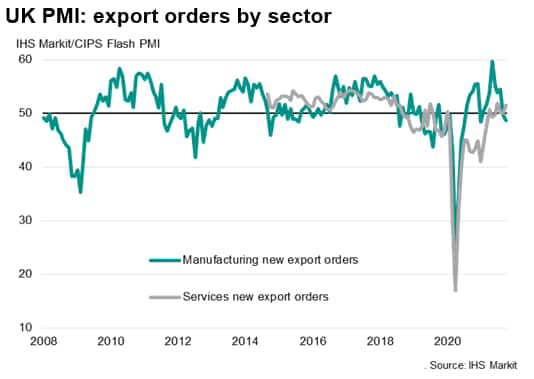 Prices are rising at a record pace

The expansion has been accompanied by an unprecedented rise in price pressures. The latest increase in average costs was the largest since comparable data first became available in January 1998. Survey respondents often cited rising fuel, transport and energy bills , as well as steep price increases for shortage items.

UK private sector business production costs have risen at the fastest rate since the index began more than two decades ago in response to escalating input costs, with record rates of increase and accelerated observed in both manufacturing and services. 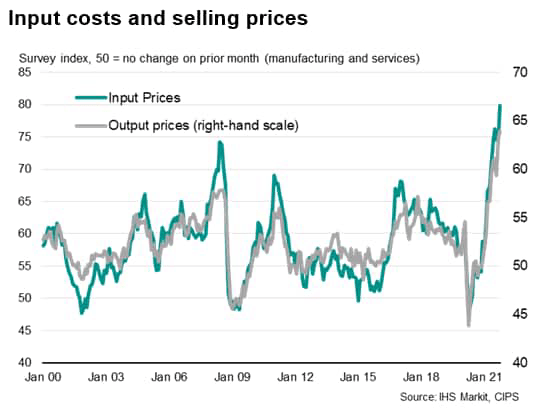 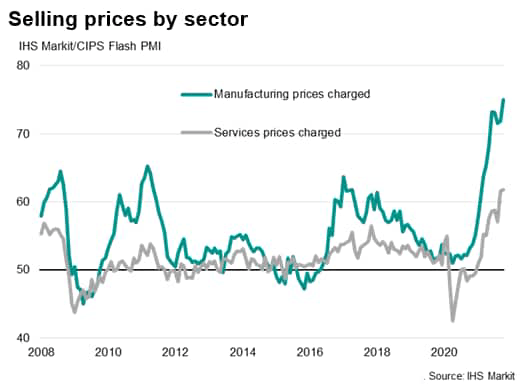 These increased price pressures will inevitably translate into higher consumer prices in the months ahead. After moderating to 3.1% in September, consumer price inflation is expected to pick up sharply further as the end of the year approaches, as PMI price indicators tend to lead official inflation data. 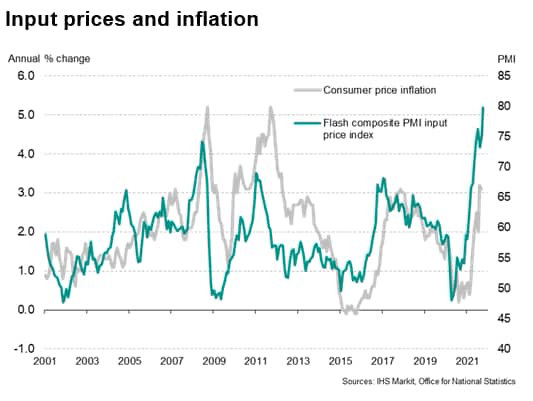 The flash PMI data comes at a time when the Bank of England is looking at raising interest rates to hedge against rising inflation expectations. The record readings of price indicators from the PMI survey will inevitably fuel these inflation concerns and strengthen the case for higher interest rates. 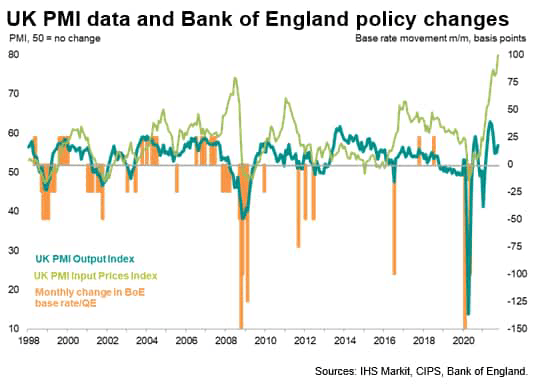 However, the economic growth signals from the PMI remain less convincing from a political point of view. The services sector is clearly in a sweet spot as the UK has seen more people’s lives and livelihoods move closer to normal. Part of the growth momentum will therefore fade over the course of this rebound. Moreover, the increase in the number of COVID-19 cases poses a downside risk to growth in the coming months, potentially discouraging some service-oriented activities among consumers in particular and potentially leading to the new application of health restrictions as winter approaches. 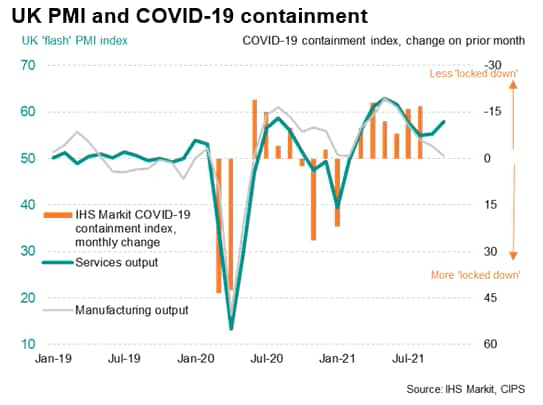 Meanwhile, the recovery faces headwinds from many other angles. It is becoming increasingly clear that businesses will face disrupted supply chains and higher logistics costs for some time to come, as well as severe labor shortages and pressures increasing salaries. British households, meanwhile, are facing rising prices, including high energy and fuel costs, as well as impending tax increases and the end of several COVID-19 support measures.

It is therefore clear that the economy’s resilience will be put to the test over the coming months, suggesting a strong risk that any impending policy tightening will need to be quickly reversed.

Editor’s note: The summary bullet points for this article were chosen by the Seeking Alpha editors.

UK service sector growth hit a 10-month low in December as the Omicron Covid variant took its toll, according to a survey released on Thursday. the IHS Markit/CIPS The services purchasing managers’ index fell to 53.6 from 58.5 in November, reaching its lowest level since February. Still, it remained above the 50.0 mark that separates […]

FILE PHOTO: A wellhead and drilling rig in Russia’s Yarakta oil field (Reuters) – Business activity in Russia’s services sector returned to growth in February as inflationary pressure eased and business confidence hit a five-month high, the Markit index showed on Thursday. purchasing managers (PMI). The precise dates of the investigation, which made no mention […]