The Eurozone economy maintained encouraging resilient growth in May as a beleaguered manufacturing sector was offset by a buoyant services sector. Although factories continue to report widespread supply constraints and falling demand for goods amid high price pressures, the economy is being boosted by pent-up demand for services as pandemic-related restrictions are lifted.

However, it remains to be seen how long this rebound in the services sector can persist, especially given the rising cost of living, and weakness in manufacturing remains a concern as factory malaise is already showing signs. spread to some parts of the world. service economy.

Business growth remains robust in May

The seasonally adjusted S&P Global Eurozone PMI® composite production index fell slightly from 55.8 in April to 54.9 in May, according to the preliminary “flash” reading. The latest reading indicated an expansion in economic activity for the fifteenth consecutive month, with the growth rate declining only slightly to remain well above the survey’s long-term average.

The latest PMI data is consistent with the economy growing at a solid quarterly rate of 0.6% so far in the second quarter. 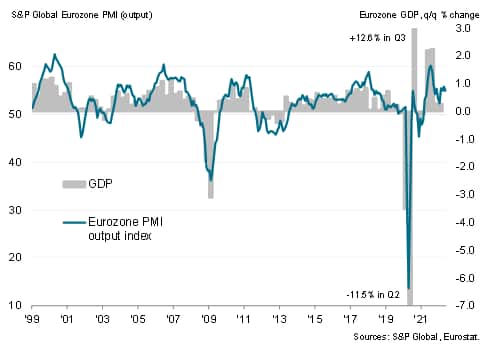 Growth was led by the services sector, which recorded its second strongest expansion in the past eight months. Many consumer-facing service businesses again reported strong demand as the economy reopened after Omicron-related restrictions, leading to particularly robust growth for tourism and leisure businesses. However, the overall growth rate of the services sector has slowed compared to April, partly due to weaker expansion in financial services and industrial services, the latter in turn linked to a recent slowdown in the manufacturing industry. 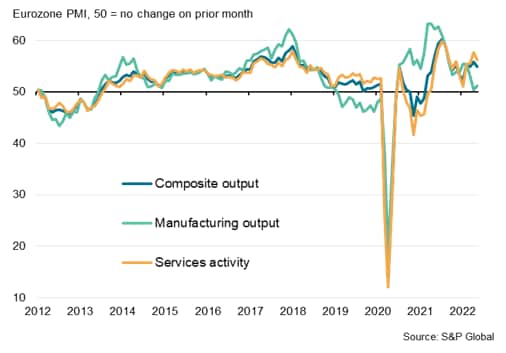 Factory output continued to be constrained by widespread supply shortages, with the war in Ukraine and mainland China shutdowns exacerbating existing pandemic-related supply chain pressures. The lengthening of delivery times from suppliers in May continued to exceed anything recorded before the pandemic, although the number of delays reported fell slightly compared to March and April, which in turn contributed to support the growth of the automotive sector. However, many other manufacturing industries reported that supply chain delays, combined with heightened customer caution and the diversion of household spending from goods to services, led to weaker output growth or even a drop in production.

Measured broadly, new orders in the manufacturing sector fell for the first time since June 2020, contrasting with further solid growth in new business entries in the services sector, although the latter sees demand growth dip slightly from compared to the eight-month high in April. 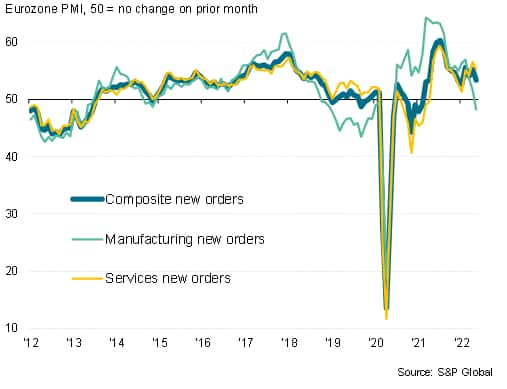 Similar sectoral divergences were seen in terms of backlogs: while ongoing case levels rose in manufacturing at the slowest pace since August 2020, pointing to lower production needs in the months Ahead, growth in service sector backlogs has hit its highest level since July 2021, rising at a pace rarely surpassed in the survey’s history to suggest that service providers may need to increase capacity. to meet the current growth in demand.

Similar rates of solid and improving employment growth were recorded in manufacturing and services, with the latter notably representing the largest increase in payrolls since July 2007, as companies sought to increase their capacity to operation. 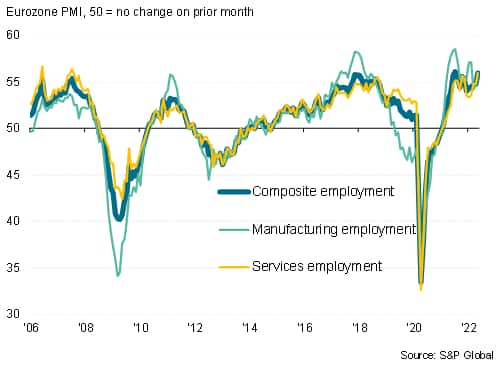 Average prices charged for goods and services meanwhile rose sharply, rising at a slower pace than April’s all-time high, but still registering the second largest increase ever recorded by the survey. Slightly lower inflation rates were seen for both goods and services, mainly reflecting the slower cost growth recorded during the month. 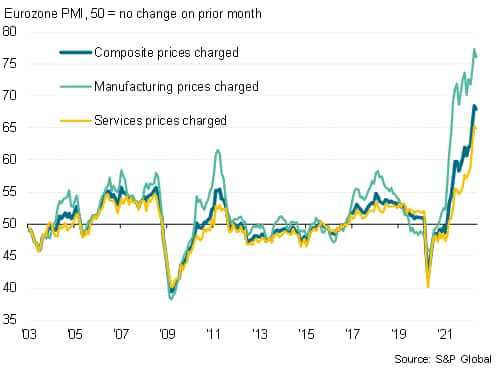 Input cost inflation eased slightly for a second consecutive month, although the rise was still the third largest since comparable data first became available in 1998 due to soaring oil prices. energy, rising transport costs, broader supplier-driven input price increases and mounting wage pressures . Rates of increase eased in both manufacturing and services to their lowest level since February, with the manufacturing sector reporting a particularly marked slowdown in commodity price inflation. However, the recent easing of supply chain delays suggests that pressures on industrial prices are beginning to ease. 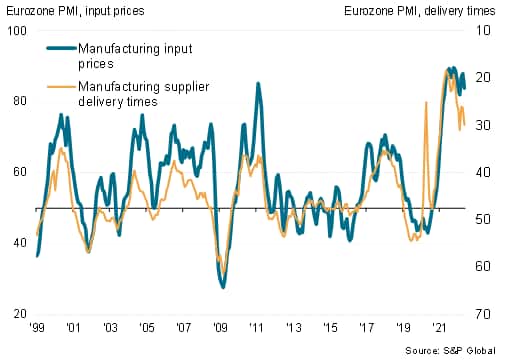 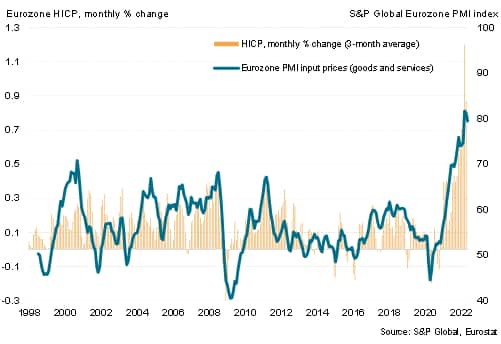 Looking ahead, business optimism about the next 12 months has deteriorated slightly to the second lowest level recorded in the last year and a half. Confidence has fallen sharply since the outbreak of war in Ukraine as uncertainty and supply constraints caused by the Russian invasion continue to be accompanied by broader global supply chain concerns linked to China. , as well as a broader gloom over the economic outlook and high inflation. Confidence fell to the lowest since the first wave of the pandemic in manufacturing in May, but remained more resilient in services. 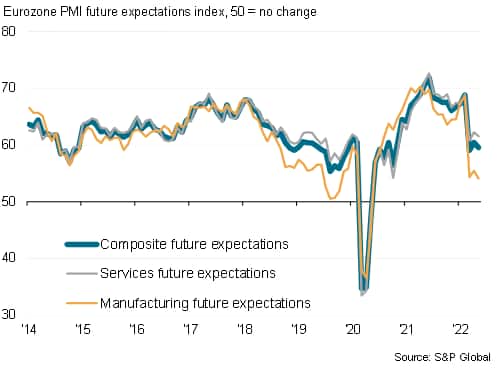 Sign up to receive updated comments in your inbox here.

© 2022, IHS Markit Inc. All rights reserved. Any total or partial reproduction without authorization is prohibited.

Purchasing Managers’ Index™ (PMI™) data is compiled by IHS Markit for over 40 economies worldwide. Monthly data are drawn from surveys of senior executives of private sector companies and are available by subscription only. The PMI data set includes a headline figure, which indicates the overall health of an economy, and sub indices, which provide insight into other key economic drivers such as GDP, inflation, exports, l utilization, employment and stocks. PMI data is used by finance and business professionals to better understand where economies and markets are going and to uncover opportunities.

Find out how to access and receive PMI data

Christmas and commitment: In the public service, December 25 is not necessarily a public holiday for everyone | News

Most people think that Christmas is a day when they won’t be needed at work. After all, even Santa Claus takes his leave after making his rounds the night before. Yet for some people, December 25 is often just another work day. They show up for work because they are the ones keeping the safety […]

Hamilton restaurant worker believes a return to the level of funding previously offered by the Canada Emergency Benefit (CEP) would greatly help food industry workers and businesses as the province grapples with a record number of COVID-19 cases linked to the Omicron variant. The ECP ended in October 2020 and was replaced by the Canada […]